You might consider rebooting this. I bet I can sell a hundred now. I still love the Redskins but I hate the NFL and the idiotic igglets for their latest stunt. Ratings are gonna tank IMHO, and by mid season advertisers will be canceling and/or pulling ads. Attendance may fare slightly better, but this is the year the wheels come off. You don't have to be an old fart like me to see how the game has changed. The league is so scared of playing real football anymore, and they no longer allow defense. Vince Lombardi and George Allen would hate the way the game is played today. It's wide open for a new pro league, because the NFL stopped listening to fans fifty years ago. 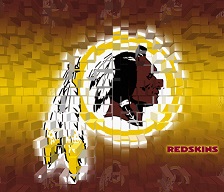 I am not sure why the NFL opened this can of worms again. By the end of last year I think 7 players in the entire league were kneeling and nobody was even noticing. Now by bringing up this owner made rule and not talking to the players union they have started it back up, and with Trump having to interject just fuels the players fire. This could get ugly. I'm hoping it doesn't but I am sick of hearing about it.
Washington Football Team, NFC Champs 2020

Real men respect real men who see the need to "protest". I dare you to go to the actual players who play and say all this to their faces.
Oh and challenge them to a .... debate.

charles324 wrote:Real men respect real men who see the need to "protest". I dare you to go to the actual players who play and say all this to their faces.
Oh and challenge them to a .... debate.

Only cowards with internet muscles complain about it. It's funny when you really look at what "offends" people. When it really has nothing to do with them. Stand if you want and kneel if you want. The people saying don't kneel are typically the same people saying why are other people offended by the name redskins and that people are too sensitive. That becomes a little hypocritical. I am fine with either, both or neither.
Washington Football Team, NFC Champs 2020
Post Reply
5 posts •Page 1 of 1

Return to “Navajo All NFL Tribe”

Users browsing this Washington forum: No registered users and 1 guest